Disclosure: I recently returned from a trip to Tequila, Mexico, hosted by the good people at Fortaleza Tequila. They don’t advertise; instead, they sponsor biannual groups of industry professionals to come down and see how their tequila is made. Their bet is that when we see the quality of the product they’re producing, we’ll feel compelled to proselytize. They’re not wrong. 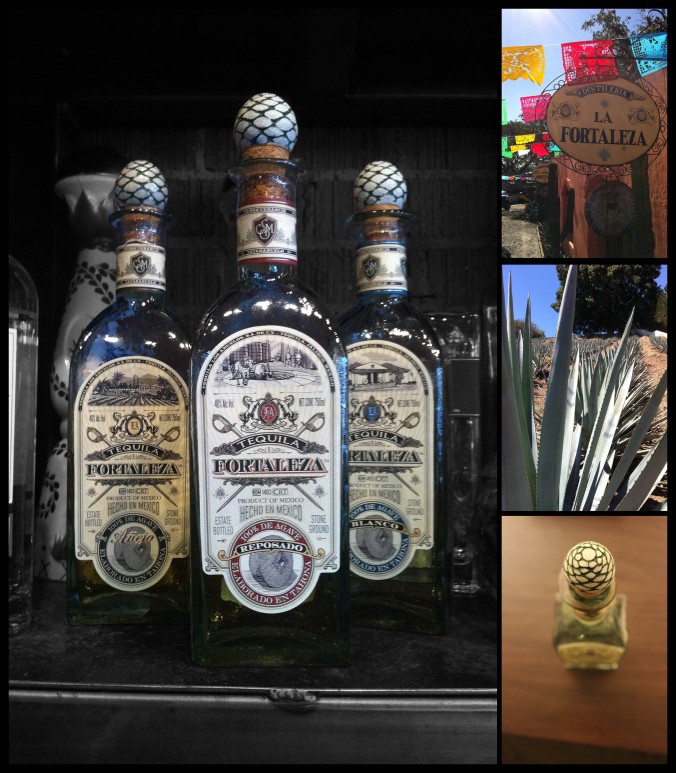 I’m going to do my best to keep this brief:

In the 1860s, a man named Don Cenobio Sauza moved to Tequila, Mexico and started distilling.  While sugars rendered from the agave plant have been getting people drunk since before Cortez and his rats showed up, Don Cenobio was the first to name it after the town of Tequila, and the first to export to the U.S. His son Eladio Sauza joined the family business and expanded, but it was Eladio’s son, Francisco Javier Sauza, that took the brand international. Don Javier was the real businessman in the lineage: he’s the one who got John Wayne drinking tequila, the main force in elevating its international perception to a refined spirit, and the reason anyone outside of Jalisco knows the name Sauza.

Sauza tequila is of course still made today, albeit in wildly different form. In 1976, Don Javier sold his eponymous tequila brand, ultimately ending up in the multinational hands of [Jim] Beam, Inc. Beam continues to run it today with capitalistic efficiency, bulldozing agave hearts into atomizing shredders, powering a diffuser the size of a small church, storing distillate in 500,000 liter drums and pumping out products that range from decent to hideous. This is to say, that is what the Sauza name currently means. 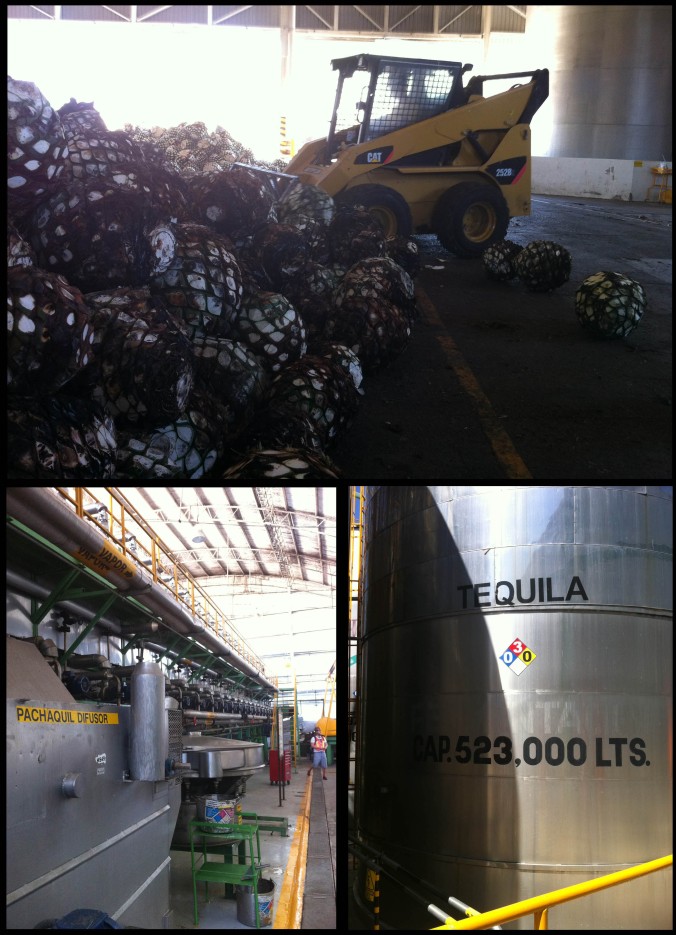 But in 2002, Guillermo Sauza — the fifth generation, whose grandfather Don Javier sold the company when he was 20 — resurrected the family business under the name “Los Abuelos” meaning “The Grandfathers,” 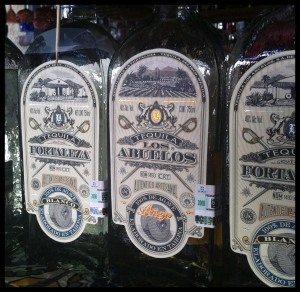 in homage to the way his family used to make tequila (“Fortaleza,” meaning “Fortitude” on this side of the border due to a copyright complaint). The family still owned a bunch of dusty distillation equipment from one of Cenobio’s original aquisitions, and Guillermo kicked it back into production. Aside from the fact that they finally retired their donkey in favor of a tractor, Guillermo still makes tequila the way his family did 100 years ago.

The Agave: Like all good tequilas, Fortaleza is 100% blue agave. The cheaper brands are allowed to throw 49% corn-syrup or sugar into the fermenting tanks and still call themselves tequila, but cannot claim “100% agave” on the bottle. Always look for this. If it doesn’t say “100% de agave,” I advise against buying it. It’s literally filler.

Because Fortaleza’s processes limit them to a maximum of three tons of agave/day, they can afford to know where all their plants come from. Their agave is a mixture of small local farmers and their own estate. 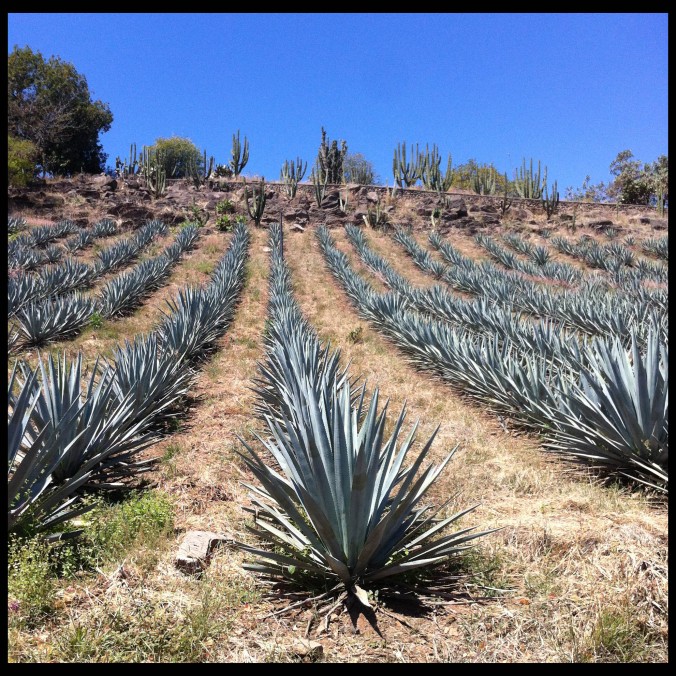 The Rendering: The agave hearts — called “piñas” (pee-nyas) — are hard as wood, and the sugars need to be rendered. So they are tossed into a brick oven with meter-thick walls, stacked up, and steam cooked for 33 hours. 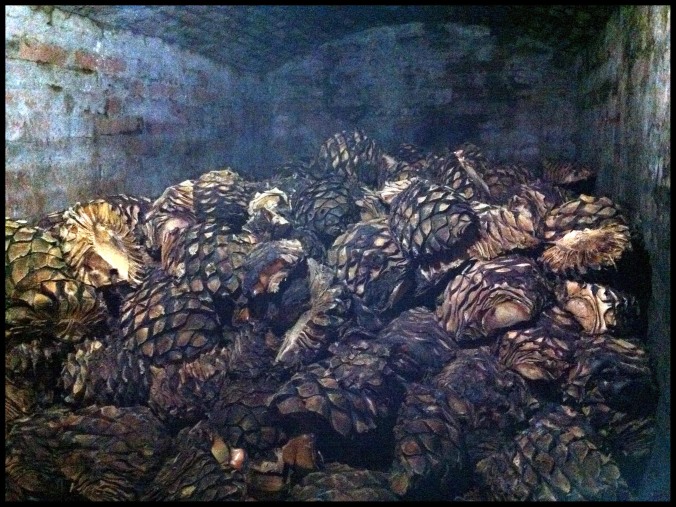 Then, the soft, sweet hearts are placed in a waist-high circular pit to face-off against several thousand pound stone called a “tahona.”

Sauza, by comparison (and not to jump all over Sauza, who were very gracious and welcoming, but that’s the industrial comparison), pulverizes the raw agave hearts to dust in a shredder before pumping them into a machine called a diffuser that pressure-cooks in 45 minutes what it takes Fortaleza 36 hours to do. The analogous reference is like a crock pot vs. a microwave: different process, different result.

Any time one is attempting to get the juice out of a plant, the less violently it is squeezed, higher quality the juice will be. This is the idea behind extra virgin olive oil and gravity press on wine, and it’s what they try to do with the mash of Fortaleza. In the pit, the piñas are crushed three times with a giant stone before separating the pulp from the juice. This fairly laborious task is accomplished over about 5 hours by four guys with pitchforks. 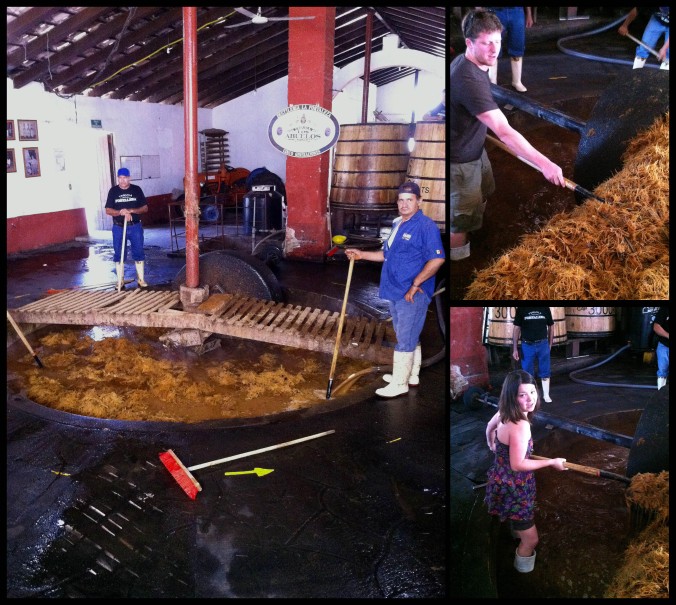 It’s not done this way merely because of tradition, or a punishment of some kind, but rather to not pulverize the tiny fibers of the agave. While the yield could be dramatically increased by machine pressing all the juice out of the pulp, that machine would also crush the smallest veins of the plant, out of which would come bitter & astringent compounds, like methanol, that would remain in the finished product.

From there, the agave juice is pumped into 3000L pinewood tanks, and fermentation is started with a bit of the sour mash from the last run. It takes a couple days for the yeast to work its magic until the brew reaches around 5% ABV, at which point it’s time for distillation. 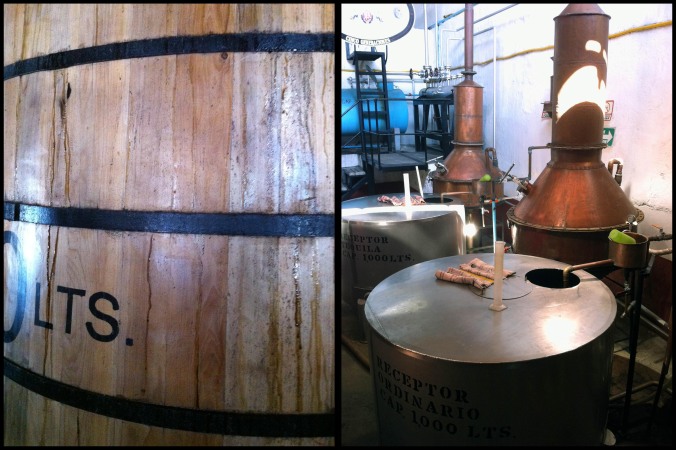 The tequila is twice distilled in just the cutest little copper pot-stills I’ve ever seen. Because their production methods are so laborious, they have less “heads” (harmful methyl) than most – about a liter, I was told (which is insanely low, and I’m now wondering if I heard it wrong. But it’s unusually small, regardless). The first distillation runs the liquid to about 25%, and the second to about 45%. And here they stop.

45% is an uncommonly low ABV to distil to, but a desirable one. All three incarnations of Fortaleza are bottled at 40%, which means it requires merely 10% water to cut it back to bottle proof. The significance of this fairly obvious. The cutting water has nothing whatsoever to do with agave, mash, fermentation, or distillation, so water is just an inert mixer. The less water is required, the more one tastes the actual heart of the spirit.

One more important note: for some bizarre reason, the Tequila Regulatory Council of Mexico allows that even if the bottle says 100% agave, it only needs to be 99% agave. Yes, really. This leaves each distillery 1% wiggle room to add one or more of the following permitted mixers: oak-essence, caramel, sugar syrup, or glycerin. And if that sounds like a bunch of bullshit to you, well, you’re not alone. It is apparently taboo to mention it, but this is why Clase Azul Reposado tastes like soft caramels and as far as I’m concerned, the entire thing is stupid from top to bottom. Fortaleza, along with Casa Noble, Siete Leguas, and many other high-end brands, participates in no such assholery.

Aging:
The blanco is unaged, straight into the bottle. The reposado (“rested”) is permitted between 2 and 12 months, and Guillermo ages his for at least six (each batch is different). The añejo (“old”) can be aged for 1-3 years. He ages his for 2, all in used whiskey barrels he picks up from Jim Beam and Jack Daniels. 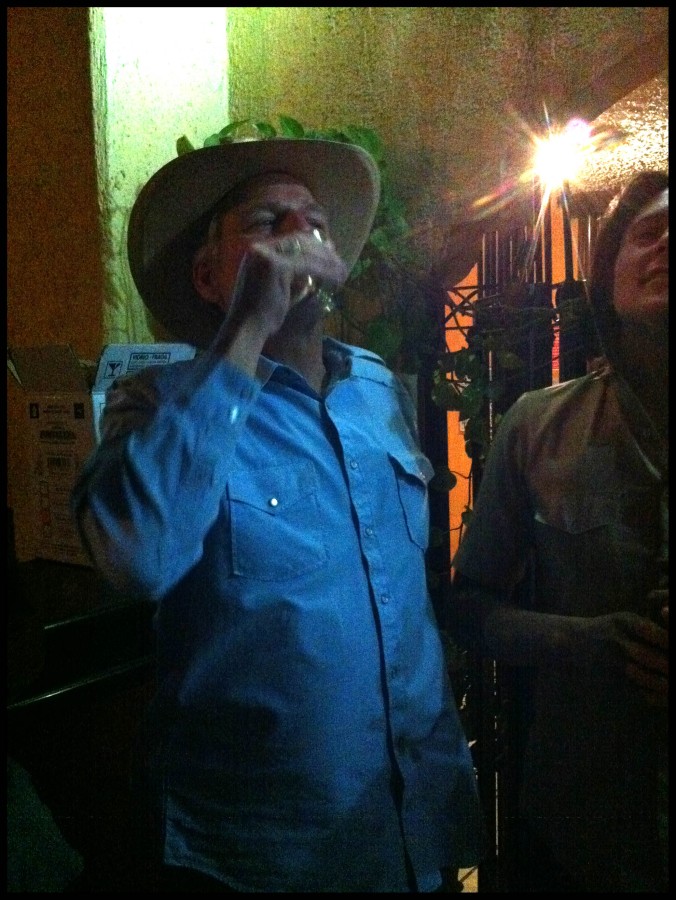 I’d be intensely interested to find out just how much each factor effects taste, but it’s unfortunately not possible. All I know is that taken in conjunction, Fortaleza is a remarkable spirit. It’s full bodied and creamy (probably due to the adorableness of the stills — though Adam Stemmler believes it’s from fermenting in pine, a byproduct of how the liquid reacts with the wood), and even the blanco has bright vanilla, almost cream soda notes, complementing pepper, sweet agave, citrus and minerals. The reposado (my favorite of the three) introduces wood and baking spices and is softer, more elegant. In the añejo, the softness of the wood takes over and the creamyness becomes buttery, with cinnamon, oak, and vanilla.

The blanco is the only of the three I’ll mix without reservation. It makes a killer margarita of course, as well as great paloma, but it really shines in stirred, citrus-less drinks. The only time I wouldn’t use it is when I want something a little more powerful, like if I’m setting the tequila up against huge flavors and want the spirit to shine. In cases like that, smoothness works against you.

The reposado and the añejo are good mixers as well. Down at Syrah, Stemmler made a reposado play on an Aviation that I hear is delicious, and they both can make decent stand-ins for whiskey — particularly as the base of a Oaxacan Old Fashioned, which is transcendent with either.