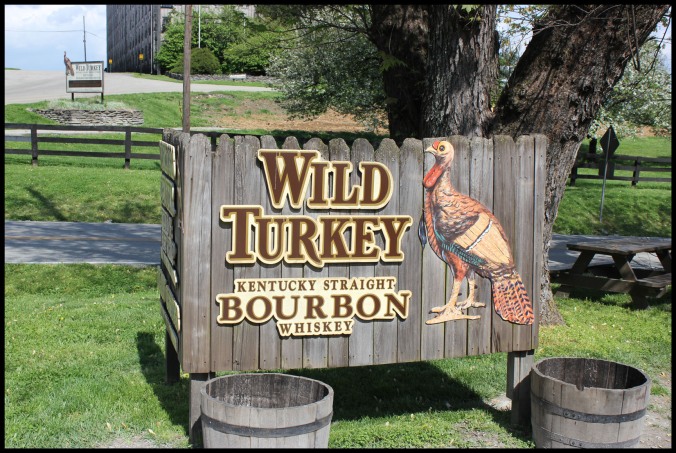 The Wild Turkey distillery sits — or at least used to sit — up on Wild Turkey Hill, overlooking a 19th century railroad bridge about 18 miles upriver from Frankfort. The old distillery has been demolished, the site is bare now but for turned dirt and a few enormous aging warehouses. It’s a beautiful view and the tour still goes up there, but first, we bourbon pilgrims are loaded onto a small bus from the visitor’s center and taken a couple minutes up the road to the monstrous new distillery, gleaming stark and treeless in the afternoon sun.

The new facilities are one year old, and are a prayer to the gods of efficiency. Everything is clean and new and sparsely populated. Where the others generally had some blend of softened aesthetics and age-seasoned brick, Wild Turkey is produced in what is essentially a giant concrete cube. It’s industrial minimalism at its most logical: they make a product there, they make a lot of it and they make it well. It’s as if they’re saying that the bourbon doesn’t taste any better if the walls are covered in old photographs, so who gives a shit?

Strangely absent were not just personal touches but almost any people at all. We asked our tour guide about this, and she told us that the entire massive operation, churning out up to 11 million gallons of bourbon annually (about 30,000 gallons/day), is run chiefly by three people in a control room. It’s a triumph of mechanical industry and a powerfully impersonal experience, and while it again doesn’t speak to the final taste at all, we kind of felt like we were touring a bumper factory.

I am aware that asking a factory to be charming is like asking a child to be wise. It’s a self-consciously absurd disappointment, and I should underline, for the record, that the bourbon isn’t any better or worse because the building was built in the current century. 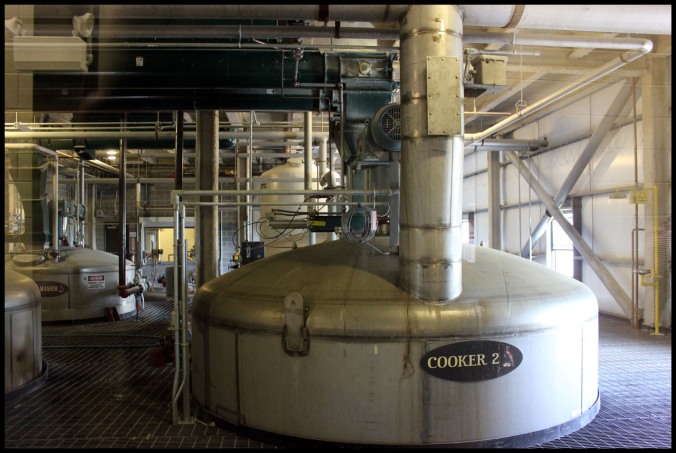 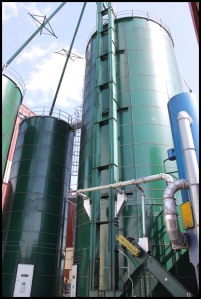 They use local Kentucky corn, German rye and Dakota/Montana/Minnesota barley, and excess grain is stored in the towering silos out front. Like most of the others, the exact mashbill is a secret, but they would tell us that all of the five bourbons coming out of the distillery use the same recipe. In other words, it’s all the exact same product coming out of the still; whether it ends its journey as Wild Turkey 101 or Wild Turkey Rare Breed (or whatever) depends on where and how it’s aged.

Alongside the mash room is our first tour stop, a little screening room where we learn how the bourbon is made. Jimmy Russel is the face of Wild Turkey and has been with the company for 58 years, but his son Eddie is now the master distiller and controls the day-to-day, taking us through essentially the whole process in a 7 minute DVD. Eddie Russel is visibly uncomfortable in front of a camera and it makes it all feel a little homemade, which is a nice touch. Their video is a little more suave than the one at Buffalo Trace, but then, so’s a middle-school talent show. 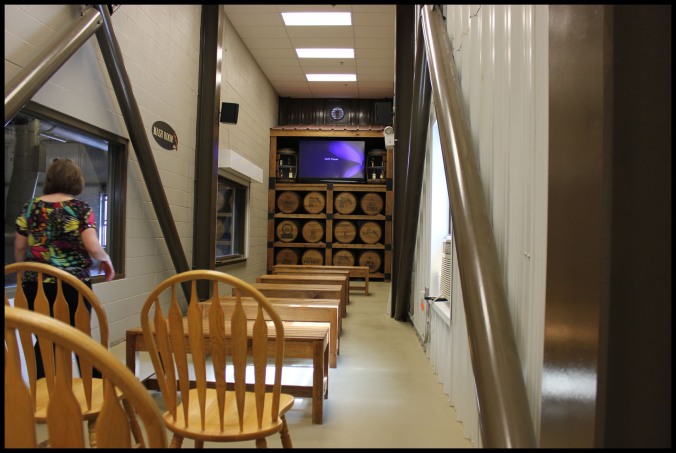 The Wild Turkey fermentation room is a capatious expanse of steel tubs, tubes, and grates. They keep twenty-three 30,000 gallon fermentation tanks, and each at a different stage of operation guarantees that while it may look like nondescript, the smell betrays what’s being made there.

As with the others, the 3 day sour-mash fermentation process brings it up to about 9% alcohol. I don’t know if  it’s unique or if the others just didn’t mention it, but one of the features of their fermentation tanks are little boat propellers at the bottom, so the distiller’s beer can be mixed  automatically before being drained automatically into distillation.

All of their equipment is kept in a dark room behind thick glass, but you can still see that their 45′ still is made of copper. This is a traditional choice and a better one than stainless steel, for some metaphysical reason most people embrace but can’t explain. Those who can explain it say that copper catalyzes the breakdown of bad flavors and sulpheric compounds in a way that steel doesn’t. Specifically, copper reacts with the naturally occurring sulfuric compounds to create copper sulfate, which precipitates (turns solid) and therefore doesn’t end up in your bottle.

And if that’s more than you need to know, just know that copper, when available, is the tradition everywhere distillation is practiced.

Anyway. The column brings the spirit up to 115 proof, and it is pumped to a “doubler” pot still that brings it up to a modest 130. Woodford Reserve by contrast brings their spirit all the way up to 158 and then dilutes it back down for aging, but Wild Turkey keeps it low, they say, to retain more of the flavor. They only need to add a touch of water to get it down to 125, at which point they pour it in barrels and send it to age.

Wild Turkey keeps 20 aging warehouses scattered about their grounds, each with a 20,000 barrel capacity (for400,000 barrels, or roughly 20,000,000 gallons of bourbon — you’re welcome). They’ll rotate the barrels from floor to floor as required, if some are aging too slowly, and taste every year to make sure the wood and heat are doing God’s work.

If you take an identical spirit and put it in seemingly identical wood barrels, and put those barrels at different spots even on the same floor of the warehouse, after 6 years they can taste vastly different. Air flow in the warehouse, exact temperature and evaporation, density of wood grains and leakage can all change the flavor of the bourbon inside. So in order to keep the flavor of Wild Turkey 101 the same every single time, they’ll batch as many barrels as they need to.

This is achieved by the master distiller and a team of professional bourbon drinkers, which sounds at once like a great and terrible job. Although this looks like a pretty cool room in which to work.

Honestly, I wasn’t too excited for Wild Turkey. I’ve always viewed it as a solid but ultimately unexceptional bourbon, and the tour itself did little to dispel that opinion. The tasting, though, was another story. I realized in the tasting room that I’d never really examined Wild Turkey 101, and as it turns out I liked it quite a bit more than I thought I did.

It comes first with a sweet cereal and caramel blast which the high-rye content almost immediately dries out. The finish tingles, probably from the rye but also a lingering alcohol burn that I find just a little bit unpleasant. It’s a huge bourbon that the rye prevents from being rich… my main complaint is the same as that of Bulleit, which is that it’s a bit jagged for my taste. A bit hot in the sweetness and in the finish, and it just kind of feels rough around the edges. But when you consider that it’s only a $20 bottle, it all becomes quite a bit better.