First things first, some (I promise) brief history & trivia on the British Royal Navy, scurvy, DrPepper Snapple Group Inc., and what any of that has to do with a grapefruit lime cordial I made in my kitchen the other day:

Scurvy is a degenerative and ultimately fatal disease caused by not enough vitamin C. As we can get like 1,200% of our daily C from one glass of orange juice, we in the 21st century don’t often require bravery in the face of scurvy. But to sailors in the 18th century, it was a essentially a plague. In that century, the 1700s, the Royal Navy lost more sailors to scurvy than they did to actual war.

Not that some didn’t have good ideas. One commander, Admiral Edward Vernon stumbled onto something when in he decreed in 1740 that lime juice be added to his sailors rations, originally to make their gross, algae’d water more palatable. Surprisingly, his men thrived while the others’ teeth fell out. There was only one problem with this: the only way to preserve lime juice for long sea voyages was to add it to their daily rations of rum (a shit hot dirty rum at that, which direly needed lime juice’s charms anyway). With their “grog” (rum, water, lime) taken in the morning as medicine, sailors were falling out of the riggings drunk by mid-afternoon. Again, better to do that with teeth than without, so the lime juice stayed. 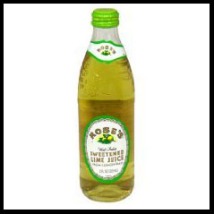 It was another 100 years before a young Scot named Lauchlan Rose patented a way to preserve lime juice without alcohol. That was 1867, the same year the Government got wise to the whole citrus business and mandated that all Navy ships give daily rations of lime juice to everyone on board. Rose’s “Lime Juice Cordial” became ubiquitous almost immediately, surviving over 140 years to present day. It pairs with gin to make a gimlet, and you can generally find a crusty old bottle of it behind most bars… But not mine. Rose’s is now owned by DrPepper Snapple Group Inc., and as such is made like a soft drink with the following ingredients: water, high fructose corn syrup, lime juice concentrate, sodium metabisulfite (preservative), natural flavors, and Blue #1. It is, with it’s lurid chemical florescence, precisely the type of saccharine bullshit that the cocktail resurgence defines itself against.

This puts us cocktail people in a uncomfortable dilemma, a kind of paradox of snobbery: you must use a lime cordial (not lime juice) to make a proper gimlet, but you also must use fresh ingredients. So what do you do? Enter: homemade cordial (I added grapefruits for a specific drink I was making; obviously this is not necessary). And what do you know, not only is it cheap and easy, it’s unbelievably good.

Step 1: Aquire a bunch of grapefruits and limes, an equal amount of each. I did 8 each, which ended up making roughly 45 ounces of cordial. Which is a lot if you’re using it 0.75oz at a time.

Step 2: Wash that shit. With a vegetable brush. Even organic citrus usually has food-grade wax on it to preserve freshness, and the peel is especially important here. 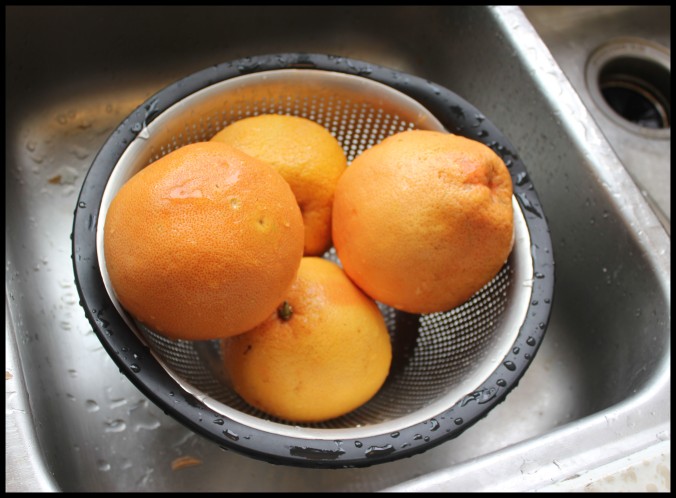 Step 3: Peel grapefruits and limes with a vegetable peeler, removing all the skin but as little as the pith as possible. Pile the skins into a large-ish bowl. This peeling business is difficult with the limes because of their thin skin, so this first time I ended up zesting them. I’ve since made a ginger/lime cordial where I said to hell with it and just peeled them, and it worked fine. This is good, because I absolutely despise zesting limes, and exponentially so in large amounts.

Step 4: Measure out 3oz of ultra-fine sugar per grapefruit, and dump it into the bowl. I used 8 grapefruits, so I covered them in 24oz (by volume) of sugar. Using a muddler, or potato crusher, or really any hard flat object, muddle (press firmly) the peels into the sugar, over and over. Your goal is to bruise most of the surface area of the peels, then surround them with the sugar. Cover and let sit on the countertop between 1-3 hours, stirring once or twice (if you want).

One of the charming characteristics of sugar is that it is oleophilic, which means that it likes to bond with oil. So for that hour, the sugar is drawing the naturally occurring citrus oils out of the bruised peels. When you come back, you find some thick, brightly citrus flavored syrup. If you were to stop now, it would be called oleo saccharum (literally “oily sugar”) a totally delicious sweetener used in punches and the like. But we’re not stopping now. Oh no. Strap in, friends, and put your juicing pants on.

Step 5: Juice the now-naked grapefruits and limes, and add that juice to the oleo saccharum. Because the size of the fruits will govern both how much peel and how much juice they give, this ratio pretty much works itself out.

Step 6: Add the mixture to a heat. Just a little, well before boil, just enough so gentle stirring dissolves the sugar. As soon as the sugar has been completely dissolved, remove.

Step 7: Strain out all the solids. The sugar makes it thick, so this is easiest done when it’s still warm. My method is to use a pasta strainer to get the big peels, then a tea strainer for the smaller pulpy business, but you do whatever you want. This is America, after all.

The pulp won’t ruin anything, but it’s better without. Step 8: Bottle, and refrigerate. Once it cools down, it’s ready to go.

It’s sweet and tart, with an unbelievable brightness from the citrus oil. The sugar more or less neutralizes the bitterness from the grapefruit, giving it a candied feel. Add carbonated water for an amazing soda, or mix with pretty much whatever you like.

BONUS COCKTAIL: I made this for the GQ Bombay Sapphire “Most Imaginative Bartender” competition. I would’ve ordinarily stopped at the basic drink, but that “imaginative” part demanded more. Thus the weirdness. It didn’t win or anything but I was still very pleased with it, and it’s been enjoying orders for 2nds and even 3rds at the bar.

You could stop now, but what makes it way better is:

Rinse the glass with Batavia Arrack if possible; if not, an agricole rum or cachaca. If not, a funky rum. If you have nothing, or nothing but Bacardi, go buy better rum.

You could definitely stop now, but what makes it (whoooaaa!) “imaginitive” is:

It works equally well with rum or tequila. Tweak the recipe or your expectations and you don’t need the lime juice. I find the acidity is nice for balance, but do what you like. And if you find something cool, tell me about it. Cheers.

I was recently asked to make a beer cocktail (read: a cocktail featuring beer in some way) for a mini-competition at Sessions Public. The peremeters were broad and the rules few, and yet I’ve never had a more difficult time inventing a drink. It felt like coaxing blood from a fucking stone, I think mostly because I don’t have a huge amount of respect for the category. Beer cocktails always feel forced to me, more interesting than they are delicious — I’ll have one and find it intellectually satisfying, and not need another. I think that was true of the one I ended up making, and that’s in fact been true of every beer cocktail I’ve ever had, except for one:*

Shake the scotch, syrup, and lime juice over ice. Strain into collins glass half-full with ice. Top with beer. Garnish with apple slice, and serve.

The Up in Smoke has been on Craft and Commerce’s list since they opened, I believe a Phil Ward original (but I welcome corrections on that point). While it wouldn’t take much mental horsepower to pair, say, a dark rum (caramel and vanilla flavors) with a stout or porter (vanilla and coffee flavors), this drink is the exact opposite. This pulls flavors from all over the place.

The Curieux is a Belgian-style tripel aged in bourbon barrels for 8 weeks. The beer is full of malty sweetness and almost affects a fruity character, which is here compounded by the apple syrup and given a backbone of briny, smokey scotch, a choice as strange as it is successful. Belgian beers can sometimes be too rich for beer cocktails, but the acidity of the lime juice and tart echo of the apple bat it back down.

This is a marvelously creative drink. It’s both fascinating and completely delicious, a 7-10 split in the culinary world. In 100 years, I would never have thought to invent this. Though I’ve thought of drinking it twice this week, and it’s only Thursday.

*MITIGATING DETAIL: A very talented bartender named Adam at Sessions did come up with one that I thought was superb, a rum/ginger concoction with muddled strawberries and topped with Liefmans Fruitesse, a bright, sweet fruit beer from Belgium. This echos the best drink Nick Budrow has ever made me, which was muddled strawberries with Buffalo Trace, lemon juice, simple syrup and again the Liefmans. The sweet/tart, vaguely balsamic quality of sours and lambics lends themselves to mixing with cocktails, particularly when actual berries are involved. Not that it’s necessarily better than not, but they sit more comfortably within the spectrum of deliciousness.

There was a period of about a week for which Nick, our manager, would sit downstairs alone watching this video series. It’s an Australian cartoon mocking the speech of New Zealanders, a beached kiwi whale who befriends an unhelpful pelican and bemoans the fact that he is, indeed, beached.

There are dozens of these things and Nick would watch them all, then run upstairs giggling and accost the employees with his impression of a beached Kiwi whale. This lasted roughly a week, long enough for the accent to infect the entire URBN staff. We’d approach each other unprovoked and say “Oh no, bru! I’m beached, bru!”

So in making the cocktail list, it became clear to me that I had to make a summer rum cocktail in the winter and call it Beached Bru, as a joke that is funny exclusively to the people who work at the restaurant. This is that cocktail.

This is probably the least inventive cocktail on the menu. It’s a short cucumber mojito, and the only reason I stand behind it is because the Banks rum is so goddamn delicious. I loved the rum when I tasted it and have been trying to mix with it, but everything I tried seemed to detract from the complexity of the spirit rather than add to it.

The cucumber and mint are so mild that to me, they don’t appear as flavor notes so much as like a breeze of flavor that gently sways the experience of an otherwise straightforward daiquiri. It starts with the rum’s sweetness and finishes with just the right amount of agricole funkiness. It’s accessible without being boring, and mildly dangerous only in that it seems to vanish out of the glass almost instantly.