“Some say the first bottle of ____ was brought to the court of Charlemagne by a captured Druid mystic, who proclaimed it the greatest potion in all the blah blah blah blah lies.”
— Every Liqueur Marketing Team Ever

I generally council people to just ignore the stories behind brands, because (1) they don’t matter and (2) they’re usually untrue. Made-up historical relevance is the herpes of the liquor industry, an embarrassing but manageable stain that we learn to tolerate because there is no cure. Examples are too numerous to list and range from minor exaggeration to outright lies, but as a rule, when the story begins 200+ years ago, I don’t even want to hear it.

This is true for all liquor, across the board, everywhere. Except Chartreuse. 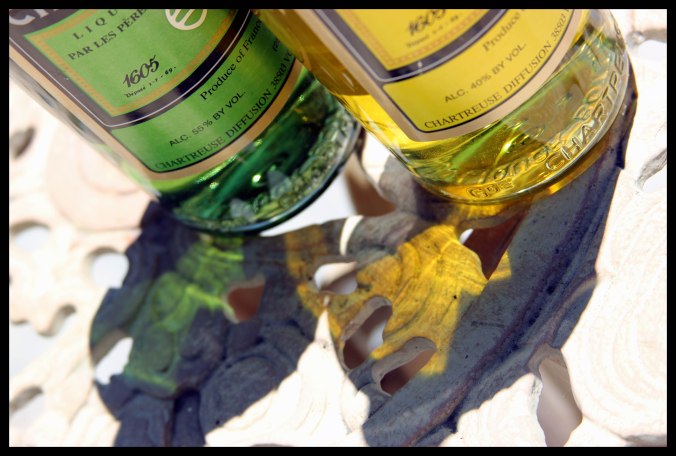 A quick word about the Carthusian monks:

In 1084, St. Bruno founded a spin-off of the Catholic church he called the Carthusian Order, after the Chartreuse mountains in France where he chose to live. The motto of the Carthusians is “Stat crux dum volvitur orbis” Latin for “The cross is steady while the world is turning,” and indeed, for the last 931 turns of the world, the Carthusian monks still live almost exactly as they always have.

It is one of the most ascetic orders of Christianity in existence, and is all about finding God through contemplation, solitude, silence, and prayer. They literally don’t talk all day. They barely see each other. Technology obviously is non-existent. It’s all stone and wood. Their whole charterhouse is built so one monk can bring a meal and spin it through a hatch so the feeder and the feedee don’t have to interact. It’s broadly misunderstood that they’ve taken some kind of vow of silence, but this is not strictly speaking true. It’s more that their lives are built around the rhythm of stillness, solitude and silence, and because speech breaks that, it is reserved for certain ritual occasions. And they also make Chartreuse, as they have since 1737.

In 1605, some Carthusian monks just outside Paris were met by Francois Hannibal d’ Estrées, Marshal of King Henri IV artillery, who gave them a recipe for the Elixir of Long Life. The recipe was hopelessly complex and the initial recipients couldn’t figure it out, so after 100 or so years the recipe was sent to the mother order, Grande Chartreuse, in the French alps near Grenoble. The monks there studied the recipe intently and ultimately cracked it, and in 1737, the Carthusian monks produced the very first Chartreuse, a vivid green from 132 different herbs, roots, and spices harvested not only at specific times of year but specific times of day. Part of the magic is that the color is natural: it somehow doesn’t turn brown like every other chlorophyll infusion in the world.

It was 71% alcohol and, like most liqueurs back then, used as medicine. But people liked to drink it as well, so in 1764, a milder version was developed at 55% alcohol, what we now know as Green Chartreuse (praising Green Chartreuse for its mildness is like praising a forest fire for its subtlety, but I suppose it’s all relative). In 1838, they made an actually mild version at 40%, Yellow Chartreuse, which uses about 80 plants, and is colored mostly by saffron.

There have been interruptions over the last 278 years. As one might imagine. The monks were forced from the country after the French Revolution in 1793, and again in 1903 when the government nationalized the distillery. In 1810 Napoleon demanded all secret recipes turned over to the state, but his scientists couldn’t make sense of it. It was made in exile for a time. In the 1930s, the distillery was destroyed by a landslide. All these obstacles, all this mystery, and still, these men who in 2015 still wear white robes in stone rooms and don’t speak and pray all day, they still produce one of the most beguiling, tastiest, inimitable liqueurs in the world.

Here’s what is indisputably true:

It’s made by Carthusian monks, in France, according to a secret recipe. It’s been made since the mid 1700s. It is one of the few bottles behind the bar that matures as it ages. And many of us regard it as the greatest liqueur ever made.

Here’s what I sincerely believe is true, despite our lack of proof:

All of it. I believe all of it. That there are 132 ingredients. That ingredients are harvested at specific hours to get the right chlorophyll levels. That the color is natural at all.

Everyone repeats these endlessly, but we have no proof. All the same, I choose to believe. It tastes true.

Here’s what let’s just say is true because who cares:

That 1605 business. Why not? Everything else about it seems true, so why not this? Whether the recipe was from 1605 or 1737 couldn’t possibly matter less, so whatever. I’ll tell that story.

For a while I was ready to call shenanigans on the whole thing, because how could these monks who probably still use a damn abacus make enough of this stuff for the million or so bottles bought every year? But they do. As with the recipe itself, you can figure things out when you have nothing but time on your hands. 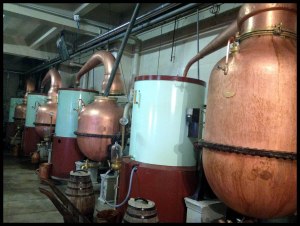 It goes like this: there are only two monks who know the recipe, Dom Benoît and Brother Jean-Jacques, and they aren’t allowed to do things like ride in a car together. Every year, a total of some 18 tons of the various 130+ berries, roots, herbs, barks, and leaves are delivered in secret numbered sacks to the herb room, where only those two monks dry, grind, and combine them into new sacks, which are then themselves numbered and sent to the distillery.

Even the distillery is off-limits to most, but there they have help — two “laymen” who help physically run the stills. Each sack is macerated for it’s certain amount of hours in neutral spirit, and then distilled for about 8 hours. It is then macerated again for color and flavor, sweetened with sugar and honey, then sent to age in large neutral oak casks for couple years until it’s ready.

There’s Green and Yellow, of course. In Europe they sell the original “Elixir,” at 69% ABV. There’s also the Green and Yellow versions of the V.E.P. (Vieillissement Exceptionnellement Prolongé), a more expensive, extra-aged version that is devastatingly tasty.

For many of us, Green Chartreuse is inseparable from the Last Word cocktail. Invented at the Detroit Athletic Club in 1916, it twiddled in cocktail purgatory until being resurrected by the legendary Murray Stenson, at the Zig Zag cafe, somewhere around 2005. It shouldn’t work but it does, and there is, quite simply, nothing else like it. It’s gone around the world and everyone knows it now. Ask for one next time you’re at a cocktail bar. And get the original. No, you don’t want to try their house variation with tarragon-infused Aquavit or whatever instead of gin. You want a Last Word.

The Last Word
0.75oz gin
0.75oz Green Chartreuse
0.75oz Luxardo Maraschino liqueur
0.75oz lime juice
Add all ingredients to tin and shake well. Strain into chilled cocktail class, and garnish with a real maraschino cherry. If you have no cherries, or only have the shit cherries the color of a clown’s nose, just leave it naked.

Beyond that, there a classic called a Bijou, which is equal parts gin, sweet vermouth, and Green Chartreuse, and which I admit I’ve never liked. Yellow Chartreuse makes one of my favorite Manhattan variations, the painfully delicious Greenpoint. There’s the fantastic tiki-d out Chartreuse Swizzle by Marco Dionysos up at Smuggler’s Cove in San Francisco. I’ve also had great fun with the Silent Order, a Green Chartreuse-based drink I enjoy pulling out of my mental weird shit folder when such a thing is called for.

TRIVIA!: Interior decorators among you will know Chartreuse already as a the name of a color. There are in fact two colors, chartreuse green and chartreuse yellow, and they are named after the liqueurs. Or, as Quentin Tarantino says, fumbling in front of the camera in Deathproof, “the only liquor so good they named a color after it.”