There’s something about Holiday Gift Guides, in magazines and such, that I find tremendously frustrating. Not because the suggestions are worthless, but because every single one seems to be just barely on the far side of useful. There are two kinds: the chintzy necessities you already have, except this time imprinted with kitsch (i.e. R2-D2 Measuring Cup Set, $19.99) or the solutions to problems that really don’t exist (i.e. a small electronic pouch to pre-warm your pijamas, $39.99).

Sitting, ostensibly, in the latter camp, nearly standard on such lists for the last few years, are Whiskey Stones. Whiskey Stones are 1″ cubes of soapstone that you keep in the freezer and drop (gently) into your glass of whiskey, they claim, to chill your whiskey without diluting it. One package gets you nine little rocks, and it costs $20. 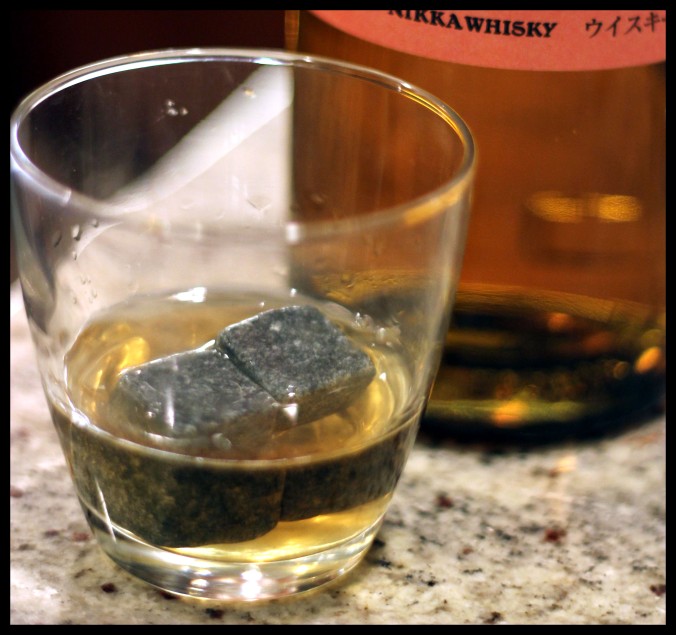 I get asked about Whiskey Stones a lot, about whether someone’s boyfriend or son would like them, about what the best kinds are (there are a few), about how I feel about ice, and several other versions of the same basic question: are Whiskey Stones worth it?

This is not one question, but three:

(1) How much cooling power do they have?
(2) Is chilling without dilution something you even want?
(3) What is it like to use them?

The first question can be answered with science. The second two fall to personal taste, and are therefore more vexing. But we’re going to tackle it anyway, because this is a blog.

(1): How Much Cooling Power do they Have?

I’m going to save you the suspense: almost none.

You would think that 2oz of whiskey stones and 2oz of ice, both straight from the freezer, would have a similar effect, no? Just that one dilutes while the other doesn’t? While that indeed does seem intuitive, you’d be wrong. You’d be wrong because ice is magic.

So what does this mean for whiskey stones?

In the marketing materials, they say they used soapstone because it has “unique ability to retain temperature for extended periods of time.” and that’s true: compared to most stones, the specific heat of soapstone is high. But comparing it to ice is like comparing a foot massage to oral sex: it ain’t the same league, it ain’t even the same fucking sport. 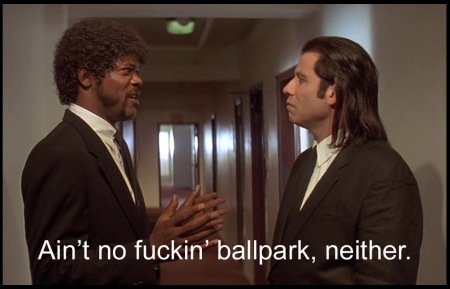 I’m also definitely not the first person to do this:

This graph is pretty typical: 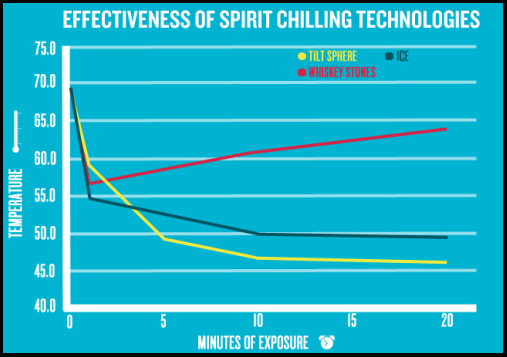 Basically, somewhere between 6-10 degrees, depending on how many you use. Which if you’re wondering, really isn’t much. It’s barely noticeable in the glass against the room temperature ones.

(2): Is Chilling without Diluting Something You Even Want?

But what’s the value of this? I mean, what’s the relationship between spirits enjoyment and temperature anyway? I tried 1oz of 45% whiskey, side by side, 5 different ways, and took temperature readings after 5 minutes:

Because so much of this falls to personal taste, I tasted with Vikki and we both silently jotted down our favorites, then shared them:

•  The frozen thick glass was the coldest, and while the cold temperature did suppress some of the more delicate flavors, it also suppressed some alcohol burn and also added silky viscosity, which we both loved. I wouldn’t always have whiskey so cold, but for casual drinking (instead of tasting/experiencing all possible nuance), it was great.

•  As for our old friend ice, we both loved it in the beginning, as a little dilution of a 45% spirit does release and stretch out some flavors. But after a while it became too diluted and therefore gross. Get bigger ice or drink faster.

•  The big question was why did we love the frozen thick glass but not the frozen thin one? For this, I can only guess — the thin glass made the spirit cold enough to suppress flavor but not enough to add texture, and seemed to be in some weird middle ground, neither as flavorful as neat nor as silky as actual cold. 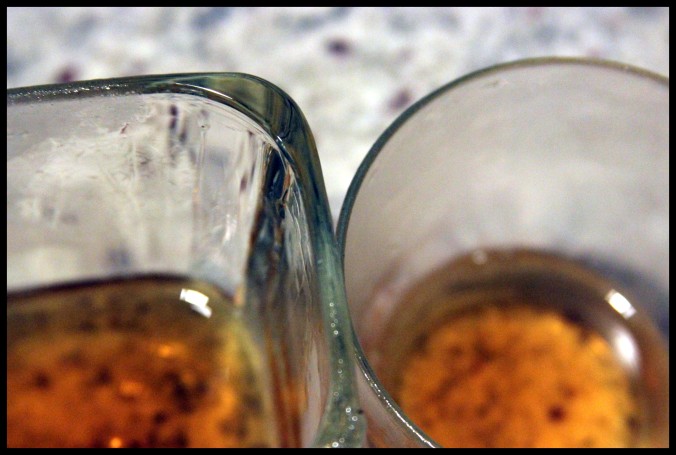 Out of the freezer: thick glass vs. thin glass.

And finally, Whiskey Stones. Both of our least favorite, by far. The temperature change was negligible. The threat of taking a rock to the teeth, however, was not. Drinking whiskey, or really doing anything at all, doesn’t exist in a vacuum: the same whiskey in the same glass at the same temperature would taste a lot better enjoyed around a fire with old friends, and a lot worse at a Motel 6 in Gary, Indiana.

Atmosphere and aesthetics matter. Temperature-wise, it didn’t really do anything but disappoint me. Beyond the disappointment, beyond the constant specter of dental injury, I ultimately found it a weird bit of superfluous pageantry to drink with actual rocks clunking around in my glass.

So, are Whiskey Stones worth it?

12 thoughts on “Are Whiskey Stones Worth It?”