I was recently invited to a four-course Balvenie tasting/dinner at Gabardine, in Point Loma. The big surprise of the night was the food, which, despite my cynical expectations, was completely delicious. I wasn’t as surprised by the scotch. I already knew the scotch was delicious. 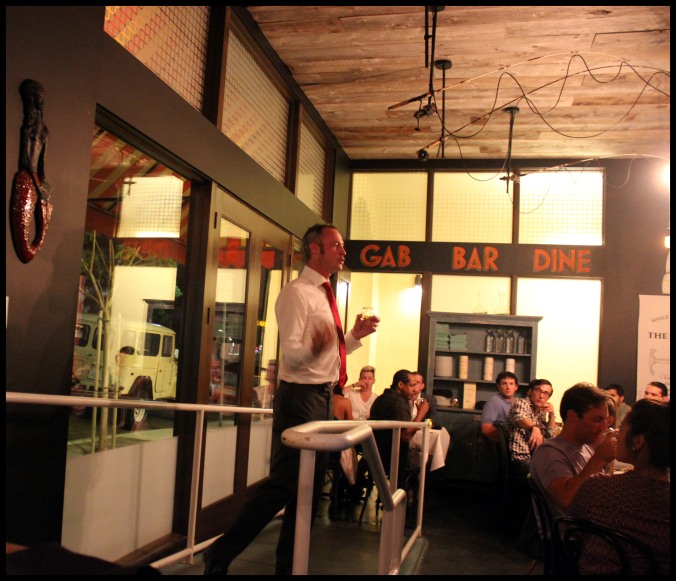 It occurs to me that I haven’t written much about scotch on this blog, which is disheartening as it means I haven’t been drinking nearly enough of it. I’d love to do a history and taxonomy of Scotch whiskey, but that’s not for now. For our immediate purposes, there are just a couple basic things you need to know —

While Scotland claims five scotch regions, many people (including me) think that insofar as regional differences are descriptive of flavor, there are really only two: coastal and inland.

If your scotch is coastal, it’s going to have more briny, salty, smoky, and/or peaty notes. If it’s inland, it’s going to be more smooth, rich sweetness.

Now, this is a grotesque oversimplification, but a momentarily useful one. Because what you need to know about The Balvenie is that it’s from Speyside (inland), and as such we know we can expect smooth & sweet, and use it as a launching point.

Also — though I’m sure you don’t give one single fuck about this — I have to make a couple very quick linguistic points:

Like all single malts, Balvenie uses 100% malted barley. Unlike almost any of the single malts anymore, Balvenie grows a healthy portion of their own malt on Balvenie Mains, the 1000 acre farm they’ve owned since the first drop of whiskey came off the stills on May 1, 1893.

To turn barley into malt (n.), you need to malt (v.) it, which is done by soaking it in water for a couple days and laying it out on the floor to sprout. This process produces the enzymes that converts the starches in the barley to fermentable sugars.

They want the barley to germinate, they don’t want it to actually turn into a plant. So when the moment’s exactly right, they stop the germination with heat via an enormous kiln, fueled by anthracite and a little bit of peat (if you’re ever wondering where the smoked peat quality of some scotches comes from, it’s this process).

The dried malt is now ground into a fine powder, cooked with spring water to make essentially a sugary barley soup, and then pumped to the fermenters with yeast to turn that soup into beer. Fermentation takes about three days and yields a brew somewhere around 8% ABV.

Like most single malts, Balvenie is twice distilled in copper pot stills. The law says they can distill it all the way up to 94.8% and still call it scotch, which is crazy and practically vodka at that point. Balvenie obviously doesn’t do that and only goes up to 70%, and is diluted to 63.5% before it goes into the barrel.

One thing that doesn’t really matter but is pretty cool is that they keep a dedicated coppersmith on staff to look after the stills. Copper is essential. It actually interacts with the distillate, precipitating some of the uglier compounds so they don’t get into the final product. That reaction, however, takes a tiny (like, molecular tiny) layer of the copper with it every run. A little part of the stills die with every distillation, donating themselves to the greater cause. Thus, coppersmith.

Scotch is almost never aged in new casks (compared to bourbon, where all casks legally must be brand new… and yes, avid and curious reader, most bourbon distilleries ship forests of used barrels to Scotland). This means that it gets less oaky tannins from the wood, and more flavors from what the barrel was last used for.

But Balvenie doesn’t just trust anyone to make their barrels, oh no. Remember control? A team of seven coopers make all Balvenie’s barrels, making sure they all are exactly how they want them. Some are then sent to America to age bourbon, some to rum, some to sherry. Then they come back, age scotch, and finish the process.

And now, thank god, we finally get to drink.

Balvenie Doublewood 12:
Paired with an oyster, with green apple and mint foam.

Aged for 12 years in used bourbon casks, then between 3 and 9 months in used Sherry casks, this one is their entry-level whiskey. Some distilleries go the whole way in sherry casks and get a strong fruity, nutty character to them, but here it’s just a whisper. Balvenie is called the most honeyed of malts, and here’s why: strong honey, very light peat and fruit.

The Doublewood is a solid, entry level single malt, perfectly sweet and smooth. Maybe a bit too smooth. This is my only problem with it actually, that it’s well rounded but not stark… it doesn’t stake a claim, it’s just tasty, and as such I’m often surprised to find that I’ve finished my glass. That kind of problem. A great value for the money, good but not attention-drawingly so.

This one is pretty cool, created as a permanent offering after the success of their amazing but limited 17-year rum cask. Unwilling to trust the rum people with their casks, Balvenie buys rum, brings it to Scotland, ages it in their own barrels for 9 months, then sells the rum back and BAM: rum casks.

It’s got rum flavors for sure, full of oak, vanilla, and spice to complement the signature honey sweetness. Caramel notes heavy on a long finish. Smooth as eggs, with a bit more complexity to help solve that hole-in-the-glass problem I had with the 12.

As you may already know, every cask of whiskey is different, even if it’s the identical whiskey that goes into (seemingly) identical casks. It’s Chaos Theory’s contribution to the whiskey game: grains of wood, ambient temperature, air circulation and molecular structure are just a few of the endless amount of variables that simply cannot be controlled. So when you buy a single-barrel whiskey, you’re buying the Malt Master’s sensibilities: this guy literally just goes around tasting a bunch of barrels, and picks the ones he thinks are cool enough to sell as individuals.

The 15 was the stand-out of the night for me. Huge complexity, really fascinating: honey of course, but also heather, brown sugar, wood, leather, peat… great whiskey. At something like $70, it’s a steal.

Finished in Port barrels, this was an excellent with the chocolate cake, the best pairing of the night. Goes wonderfully with delicate chocolate desserts. It is, in fact, an excellent whiskey, replete with honey, nutty flavors, getting a bit of dried fruit from the port casks. I remember it being silky and pungent, best opened with a couple drops of water.

This bottle retails at $200, and I’ll say these two things about that: (1) the Balvenie Portwood 21 is a profound whiskey, and (2) in my life, I have not yet found a bottle of inland single malt scotch that I’d pay $200 for. Take that for what you will.

Probably the coolest pronunciation guide you’ll ever find. What would you do if you had a bunch of money, a huge reach, and a readership curious about the finer things?