*** Note: a version of this article appears at RobbReport.com ***

“As the scene opens, you are up in your grandmother’s attic opening the dusty steamer trunk she brought from Europe in 1914. You reverently turn back layer upon layer of old lace and brocade … unveiling a packet of old love letters tied in silk ribbon. Ancient dried rose petals flutter down from between the envelopes.

This is what the Widow’s Kiss is like. Sweet, complex and darkly golden, thought-provoking and introspective. It is a cocktail of fall turning toward winter, and it wins [my] award as the most evocative drink ever. Have one by the fire.”

There’s something about the Widow’s Kiss that compels people write about it romantically. It’s not just that it’s delicious, though it is. And it certainly has one of the best cocktail names in history. But there’s something else… as with the lovely Colleen Bawn, this drink uses Yellow Chartreuse and Bénédictine, both pungent herbal liqueurs, which lock into each other like a vacuum seal. They work wonderfully together, full and rich and infinitely complex. Add the apple brandy at their base and some Angostura bitters to spice the apples, and the result synergizes into wistfulness like a half-forgotten memory, and seems to force people to write about it like this:

On a chilly November evening, post-Dallas, post-Watergate, post-Florida, post-9/11, and not-yet-post-Iraq, there’s no small amount of satisfaction to be found in a drink that calls up a honeyed past, and provides a moment’s distraction from the bitter present.

Or consider The New York Herald, in the 1890s, writing an article about the drink’s creator George J. Kappeler and his bar the Holland House, declaring:

[The Widow’s Kiss is] the most passionate poem which the liquor laureates of the Holland house hand out.

Facile alliteration aside, I think you catch my point. People just can’t seem to help themselves.

Not that I blame them. The Widow’s Kiss is a wonderful drink, in any of its forms. Everyone agrees on the principal ingredients: Apple brandy (either the clean American kind or the earthier French Calvados), Yellow Chartreuse, Bénédictine, and Angostura bitters. Most agree on the proportions, preparation, and technique, as well, though there is some reasonable dissent. Here’s the thing: it’s really goddamn sweet. Tastes have grown drier in the 117 years since this drink’s invention. So there are three things that people do:

After an exhaustive and grisly round of experiments, I am firmly in camp #3. My favorite recipe:

Insofar as calvados vs. apple brandy is concerned, go with calvados if you’ve got it. It’s a heavier spirit, more rustic and agricultural than American apple brandy, and it seamlessly fills the gaps left by the liqueurs and bitters. With calvados, use either no garnish or a neutral aesthetic garnish, like a cherry. If all you have is Laird’s Apple Brandy, or even worse, Applejack, feel free to make the drink but garnish with a lemon peel: the lemon oils offer a rather pleasant misdirection to compensate for the brandy’s lack of weight. 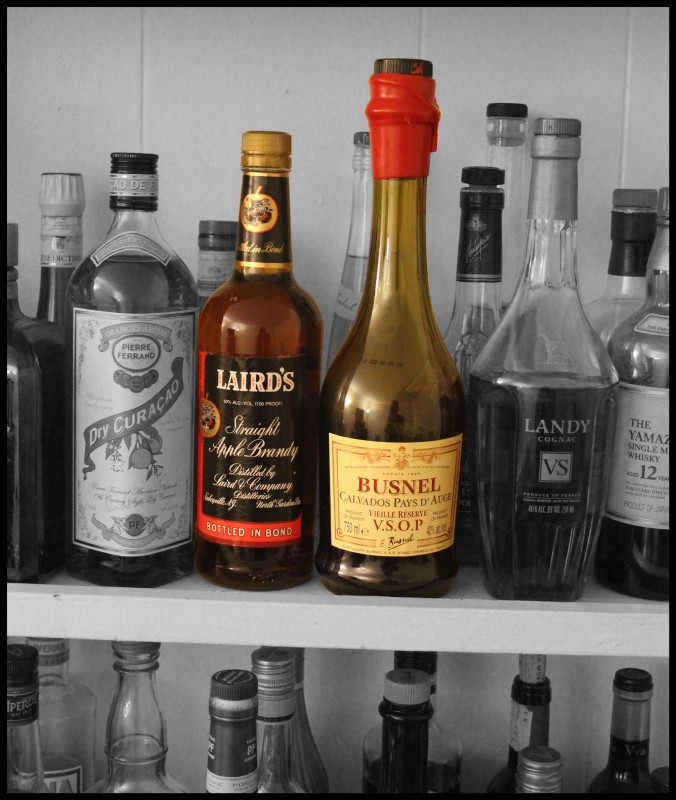 Whether to shake or stir (a.k.a. why above point #2 doesn’t really work): this kind of sweetness is only acceptable to the palate if it’s enrobed in velvet texture. Shaking makes it thinner, losing the silkiness and shoving the drink into diaspora: too sweet for a thin drink, too thin for a sweet drink. What I found curious about this experiment was that even though more dilution means less overall sugar/ounce, the shaken drink had an increased perception of sweetness. It needs the texture. That’s all there is to it. Stirring, for the win.

As for reducing the ratios of the liqueurs (a.k.a. How I Learned To Stop Worrying and Love the Sweetness): maybe you shouldn’t try to mitigate the sweetness. Maybe you should just accept that this is a sweet drink. My feeling is that the Widow’s Kiss is a perfect after-dinner-on-a-brisk-winter-night drink. Apple, honey, cinnamon spice… what could be better than that? It’s strong and warming, with no ingredients under 80 proof. It’s pungent and herbal, with complexity that unfolds over time. The sweetness helps neutralize the strength, the thickness helps justify the sweetness, and the flavors help recommend it all. They lean on each other like a tripod, and changing one brings the whole thing down.

That’s the problem with the PDT recipe. It’s fine, but it adapts the recipe to be an average anytime drink, as opposed to an exceptional after dinner drink. It loses the magic, the fifth essence, that ineffable harmony that makes Wondrich write things like “we don’t know if Kappeler had any particular widow in mind. If he did, she must have been something.”